The Mission of our cooperative is to be the Premier regional supplier and marketer of ag related services and products.

In 1918 and 1919, a group of community-minded men came to the conclusion that a grain elevator in Hemingford was a necessity and would provide an outlet for grain being raised there. It was decided to build the elevator of tile construction with a capacity of around 30,000 bushels. The Board of Directors elected to serve were: President, George Taylor; Secretary, George E. Schneider; Directors, Fred Leavitt, Ross Enyeart and Ike Wood; Temporary Manager was Alex Muirhead.

At the beginning a share was $100. August 17, 1940 at a special meeting of stockholders, Bylaws and Articles were amended and approved showing shares being $25 and capital stock $35,000.

Since then, a fertilizer plant was built in 1967. Farmers Union Oil Co and Farmer's Coop merged in 1976. In 1980 the lumber yard was sold. Two different years there were two different fires: the general office burned in 1984 and the Hagemeister elevator burned in 2008. Farmer's Coop merged with Ag Pro in 1997, adding locations in Gordon, Rushville and Hay Springs. Then the fuel and service stations were sold to Westco in 2005 leaving Farmer's Coop locations in Gordon, Hay Springs, and Hemingford. We currently serve a large trade territory as well as 1,675 stockholders.

Our efficient railroad load-out facility, which is a 110 car BNSF shuttle loader, loads grain in 10 hours and ships nationally as well as internationally. We currently have enclosed storage capacity for 12.2 million bushels of grain.

Our fertilizer division is able to meet your fertilizer needs with liquid and dry storage units at each of our locations.

With a feed mill and bagger, our feed division is able to mix and bag specialty feeds on order, as well as our own line of feed called Western Choice.

From the beginning there have been many trials and tribulations as well as additions and accomplishments. New buildings, storage tanks, feed manufacturing facilities, trucks, sprayers, etc. have all been built and added to aid stockholders and area producers to achieve their goals through the combined effort that is your cooperative . Several fires as well as mergers and departed services have changed the face of Farmer's Coop. Yet with knowledge, commitment and success we will continue to be the premier regional supplier and marketer of ag related services and products. 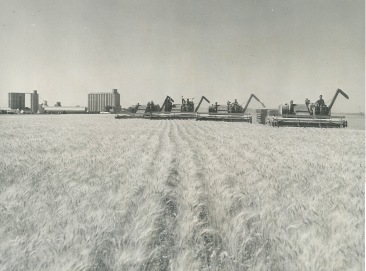